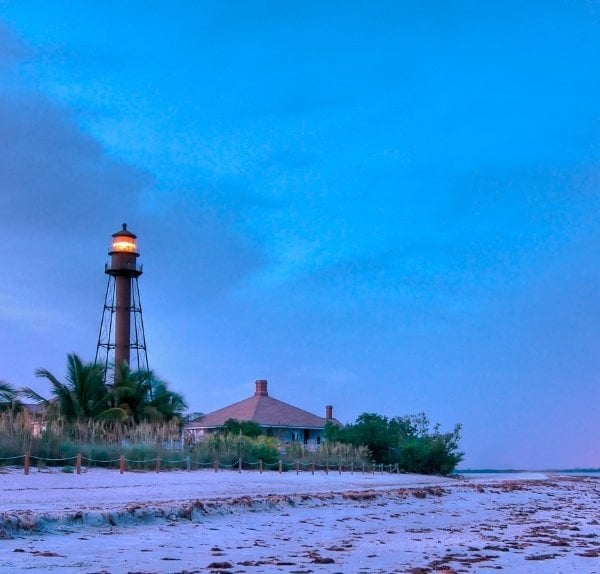 Sanibel is the largest of the two islands and sits to the south of Captiva and is one island north of Fort Myers Beach. It's host to a number of museums, including the Bailey-Matthews National Shell Museum and the Sanibel Historic Village. The origin of the island's name varies and are as wild as the island's beginnings. With one being that it was so named after the first mates, of the infamous Gaspar the Pirate, his lady love interest.  It was then spelled "Sanybel".

It was during 1884 that the Sanibel Lighthouse was constructed.   Sanibel boasts 25 miles of paved bike paths and is gifted with great sandy beaches (try Bowmans Beach) and an abundance of shells that make it  world renowned for its shelling and the "Sanibel Stoop". You'll find that is so many other things to do on the islands, that you'll never be at a loss for things to do. Whether its boating, fishing, over the top resorts or dining (remember all that fresh seafood), this is your chance to sit back, relax and become one with nature.

To the north lies the small and peaceful Captiva Island.  The 2010 Census put the permanent populate at slightly over 500 persons.  Originally it was part of Sanibel Island but a hurricane in 1926, carved out Blind Pass and created a new island. Again the origin of the name of the area is one for dispute.  But, as with the naming of Sanibel, Captiva may have also been attributed to Jose Gaspar and that he had held a number of female prisoners on the island, that were awaiting their ransom payments. The first known permanent inhabitants were the Calusa Indians, that lived throughout the SW Florida area. At the very north of the island is the lovely South Seas Island Resort. Fun fact about the islands. . . Building regulations on this is land restrict the height of any new construction to the height of the tallest tree on the island. Which is currently about 3 stories! No, high-rise condos or resorts here. It also sits outside of Pine Island Sound, with some of the best back bay fishing, as well.

So, if your plans bring you to Sanibel Island Florida, either for it's shelling, environmental endeavors or it's long and interesting history. Plan for sunshine, glorious sunsets, cool evening breezes and an easy-going outdoor lifestyle that provides a perfect island vacation paradise.  All this is just a short ride from the Key West Express ferry terminal.