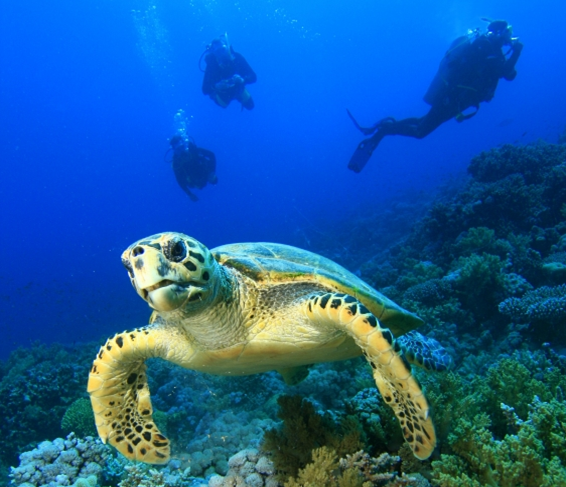 The name "Dry Tortugas" comes from the island itself.  When Ponce de Leon discovered the island, he was amazed by the amount of sea turtles in the waters surrounding the island, "Tortugas" means turtles in Spanish.  Later, "Dry" was added to the name of the island to inform sailors that they would need to bring their own fresh water to drink.

The small island is about 70 miles from Key West and the is western most island of the Florida Keys. The area of the park is about 99 percent water. Most of the area has been designated as a research natural area, in which no marine life may be taken.

Because of the large reefs surrounding the Tortugas, the U.S. established one of the most strategic harbors in it's history: Fort Jefferson.   This remains one of the largest brick buildings in the U.S. with over 16 million, hand made, individual bricks. 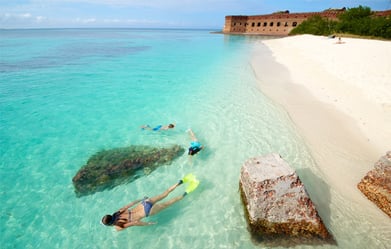 Following the War of 1812, a number of forts were built all along the eastern sea-coast of the U.S., as well as along  the shores of the Gulf of Mexico.  Fort Jefferson was just one of them.  It was built in a six-sided, hexagonal shape to have a  360 degree view of the island and surrounding waters.

The Dry Tortugas National Park currently possess one of the richest concentrations of shipwrecks in North America and is a popular fishing destination.  Fort Jefferson is a national park offering some of  the best snorkeling, SCUBA diving in North  America.

Once you are on the island, you are basically left to your own devices to find things to do.  As there are no residents or businesses on the island, you will have to bring everything that you need with you AND then remove everything that you brought.  Snorkeling and diving are, of course, the main attraction of the island. As the natural coral reef structure here is truly amazing.  But, as it is a national park, you may also bring camping gear and spend the night. Remember though to pack light, as you'll be bringing everything back to Key West with you, at the end of your stay.

A good fitting pair of shoes, though are a necessity as exploring the fort can and will take a couple of hours to complete.

Visitors can take the Yankee Freedom III from  the same ferry terminal that the Key West Express leaves from. Or experience it from the air, on one of the many seaplane tours from Key West.