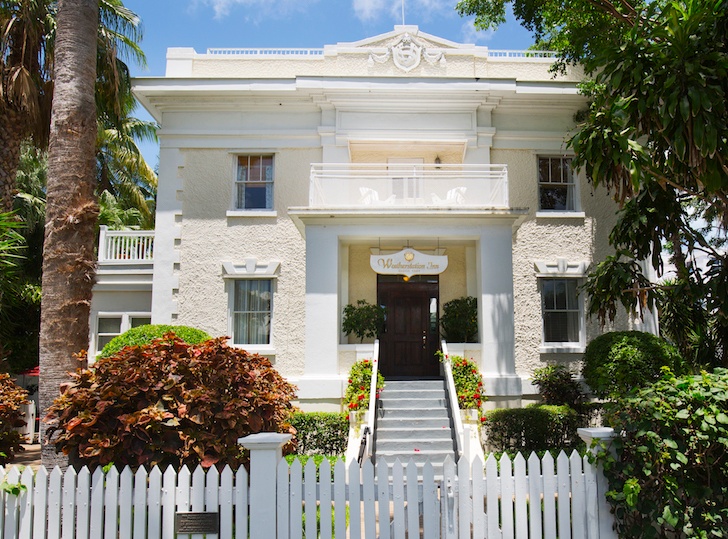 If you are looking for a stylish and unique bed and breakfast in Key West, The Weatherstation Inn is a great choice. With eight distinctively different guest rooms, this inn offers guests a private pool, balcony rooms, a large sundeck and lush landscaping that will make you feel right at home in Key West.

The Weatherstation Inn is located in the Truman Annex, which was previously the old Navy Yard, and was rebuilt into an upscale tropical neighborhood. The Truman Annex is really a mixture of Key West island life.  It is not only a residential neighborhood, but is also and and has been a military installation. It was here that President Harry S. Truman wintered, during his presidency, for 11 separate different visits!

Just before the start of World War II the Key West Naval Base was reopened, in the support of the war efforts. Destroyers, submarines, patrol craft, PBY flying boats and other aircraft were routinely seen in the waters and surrounding skys. There were even blimp operations taking place on the island.

Then in the late 1980's most of the property was sold, as it was no longer adequate to the modern needs of the Navy, and in 2002 an additional 22 acres were sold to the City of Key West.  The Navy does to this day, keep a presence in the area and maintains a headquarters structure for the JIATF-South.

With it's exquisitely manicured lawns and grounds, it's interconnected pathways between historic buildings, government housings and official Naval installation needs.  Gives the area a regal, park-like feel that would make your Key West hideaway all the more real and memorable.

You will be located only minutes from the famous Mallory Square and historic Fort Zachary Taylor.  So, take a step back in time and explore all that there is to see and do in this historic little part of Key West.  You might even wind up standing in just the same places where President Truman presided and you may even feel a bit "Presidential" yourself!

Still looking for that perfect Key West getaway spot?  We've got you covered!