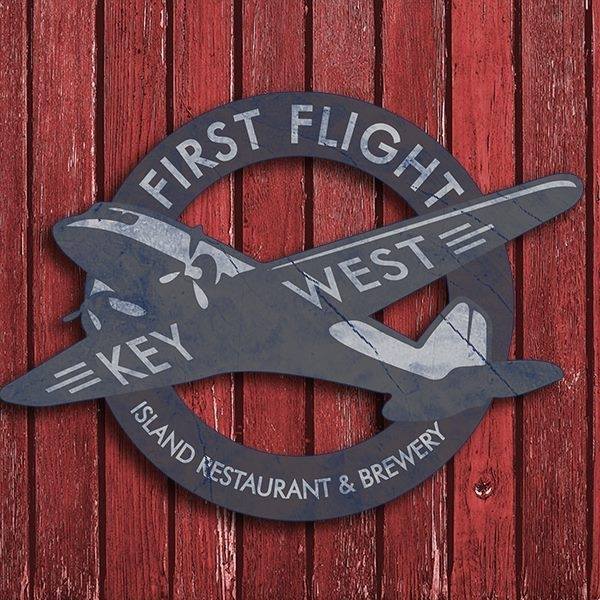 There is so much history in Key West, and First Flight Island Restaurant & Brewery is the perfect spot to brush up on some! While the restaurant name is relatively new, the building is not. This historic building on Whitehead and Caroline Street is best known for being the birthplace of Pan American World Airways, Pan-Am. The airlines started selling tickets from this building in 1927. It was the largest of all international airlines in the US from 1927 until 1991. One of it's more notable offerings was the scheduled mail delivery service and passenger airlines to Havana, Cuba. It also let the industry in the use of jumbo jets and computerized reservation systems.

Now that you understand a little about the history of the building, it’s easy to understand why the restaurant and brewery owners decided to called their business, First Flight.

The main level dining area is surrounded by beautiful, towering trees that make for a lovely canopy.  The bar area is one to behold, as it has a vintage airplane, seemingly crashing through the ceiling into the bar area and the bar itself is an airplane wing!

The second story Tree Top Deck is perfect for celebrations of any kind from wedding parties to travel groups. With a fantastic view of Whitehead Street and the gardens below.

As mentioned above the airplane bar or as it's better known as the Crash Bar houses the First Flight Brewery. Where they brew their own mouth watering adult beverages.

For something a bit on the more formal side, you might also want to visit their sister establishment the Bagatelle, on Duval Street.

When you're ready to make the trip, be sure to book your ride with us and we'll have you in Key West before you know it.