June was chosen for LGBT Pride Month to commemorate the Stonewall riots, which occurred at the end of June 1969. As a result, many pride events are held during this month to recognize the impact LGBT people have had in the world.

Brenda Howard is known as the "Mother of Pride", for her work in coordinating the first LGBT Pride march and she also originated the idea for a week-long series of events around Pride Day which became the genesis of the annual LGBT Pride celebrations that are now held around the world every June. Howard along with fellow LGBT rights activists Robert A. Martin (aka Donny the Punk) and L. Craig Schoonmaker are credited with popularizing the word "Pride" to describe these festivities. As LGBT rights activist Tom Limoncelli put it, "The next time someone asks you why LGBT Pride marches exist or why Pride Month is June, tell them "A bisexual woman named Brenda Howard thought it should be". 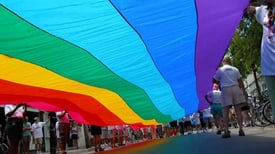 Gay pride or LGBT pride is the positive stance against discrimination and violence toward any people with alternative lifestyles to promote their self-affirmation, dignity, equal rights, increase their visibility as a social group, guild community and celebrate sexual diversity and gender variance. Pride as opposed to shame and social stigma, is the predominant outlook that bolsters most LGBT rights movements throughout the world. Pride has lent its name to LGBT-themed organizations, foundations, books, cable TV station and the Pride Library.

Remember the famous Key West Motto:  All People are created equal members of One Human Family.