The Key West Songwriters festival is the world’s LARGEST event of its kind. The five day music mania begins in early to mid May, with free shows daily as well as some performances requiring reservations.  This is THE must do for music junkies! Some of Nashville’s greatest talents made their debuts in Key West, at the song writers festival!

Song Writers Festivals are popping up nationwide however, the Key West Festival is the King Daddy of them all with over 200 performers, 100 songwriters, 50 shows and diverse lineups. 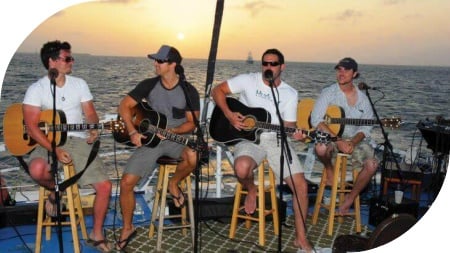 Enjoy five days and five nights of entertainment all over the island at some of your favorite watering holes like Sloppy Joes, Green Parrot, Smokin’ Tuna, Margaritaville and Blue Heaven… just to name a few. The performances are uniquely diverse and the talents of Florida Georgia Line,  Tyler Farr, LANCO,  Scotty Emerick  are just a few of the amazing performers that have graced the stages in years past.

Be  among the first to hear future award winning songs and artists make their debut on America’s southernmost island destination - Key West.   America’s southernmost city is host to many annual events, festivals and celebrations enjoyed by locals and visitors alike. Performances begin late afternoon and run into the late evening for five days of musical entertainment. Genre’s include
Country, Blues, Jazz, Folk and Rock & Roll.

The schedule of performances has been posted on the Songwriters Festival website.

Looking for other great things to do in Key West, we've got your covered or if you're ready to make that trip of a lifetime BOOK your Trip NOW.