Key West is positively a real-life Shangri La! The tiny island is approximately 4 miles long and 2 miles wide however, it can keep a “history nut” occupied for hours, days…..even weeks! Whether your interest is in the original settlers and inhabitants, politics, nature, architecture, famous residents or visitors including poets, writers, singers or pirates and treasures, marine life or quirky culture, Key West will have something to pique your interest.

Early native island residents named Key West “Cayo Hueso”, which translated means “Island of Bones”, or more commonly referred to as “Bone Island”. The island was actually used as a giant graveyard and was scattered with human bones!

The original inhabitants were believed to be Indians who had developed villages and structures on the island. The Calusa’s who were known to be peaceful, defended their territory when Juan Ponce De Leon “discovered” the new land in 1513. De Leon’s discovery did lead to the 16th century Spanish invasion, though he was not successful in conquering the Indians.  Here's a fantastic article detailing some of DeLeon's history in the New World.

A fabulous place for seeking historical details, as experienced and perceived in early Key West life, may be found by reading "A Sketch of Key West, Florida” by Walter C. Maloney. Originally penned in 1876, 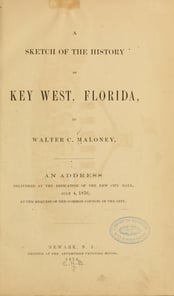 this 88 page essay is filled with fascinating details of what was at the time, the largest city in Florida.

“Key West; The Old and The New” by Jefferson Beale Browne

Published in 1912, this version, eloquently and respectfully written was begun as a more detailed version of Walter Maloney’s documentation of Key West in their era.  An archived copy of his work can be found HERE.

Key West is littered with museums for every imaginable historic interest.  Below are just a few of the many that you will find.  Some  are a bit more elusive than others, but are none the less worthy of investigation.

During and following the war in Cuba, many fled to America’s southernmost city. The Cuban influence can be easily seen in the local culture, cuisine, art, landmarks, music and cigars. Cayo Hueso Y Habana Historeum is a great place to begin your Cuban History Hunt…. but be certain to leave plenty of time, and appetite to enjoy a few of the bevy of tantalizing dining options available. Many restaurants have some historic importance, as well.

Read, research and prepare for an exciting adventure….. then book your transportation with Key West Express!